The History of Elvie McFadden School

In the fall of 1927, a new brick building with four classrooms and an auditorium opened its doors for registration.

The beginning day was muggy with late summer heat as ninety-nine pupils with a mingling of reluctancies and expectancy enrolled. At the end of the school term, this number of children had increased to one hundred fifty.

This was the Elvie McFadden School… the first school in Rutherford County to be named for a woman.

Miss Elvie McFadden ministered to the spiritual and physical needs of the underprivileged families in Westvue.  Her life was a daily demonstration of affirmative living.  “I am my brother’s keeper”, as she sought to rehabilitate lives through salvation and education.  A little mission chapel was built through her efforts.  Before her death in 1925, she was assured by B.B. Kerr, Chairman of the Rutherford County Board of Education, that a school would be built in Westvue for her beloved people, and it would bear her name.  Land for the project was acquired from Otho Cannon for $2,750.

Mrs. W.E. Manson was the first principal of the school.  Other members of the faculty were Kate Ashley, Jane Holden, and Ethel Edwards, nee Dickens.  Mrs. Edwards has the distinction of being on that first faculty and the present one.

In retrospect, Mrs. Edwards recalled pots of soup boiling on pot-bellied stoves in classrooms.  Teachers took turns making soup and serving it to those children who had small nourishment at home.

In those days, the teachers had an “esprit de corps”, and by some strange conflagration it has been transmitted to the succeeding members of McFadden faculties.

A red-letter day in that era was the Blue-Ribbon Parade.  By friendly persuasion, much hard work, and mild coercion, McFadden School had forty Blue Ribbon children marching in the parade the first year of Blue-Ribbon programs.  Each year, the number increased, and the school won loving cups for six consecutive years for having 100 percent Blue Ribbon children.

In the fall of 1928, two classrooms and the auditorium burned.  The origin of the fire was believed to have been in the flue in the back of the auditorium.  But no fire could quench the crusading spirit of the teachers and the parents.  After the fire, two more classrooms were added.

An active Parent Teacher Association was organized by Mr. Fred Smotherman who served as the first president.

Miss Neely will be remembered in the hearts and minds of her former pupils by her unforgettable character-building lesson, “The Straight and Crooked Ladder”, and her delightful telling of Uncle Remus Stories.

In 1932, plagued by another fire, McFadden’s walls stood like charred monuments.  This fire originated from a small stove in the first-grade room.  While the new building was under construction, the old East End School building on East Main Street was used for the remained of that term.  During 1932-33, Thomas Holdon served as principal.

At the beginning of the 1934 school term, the East End building had been demolished and the Burr James brick dwelling on South Church Street was rented for the use of the school.

Mrs. George Walters gave a piano to the school.  Mrs. Edwards said, “One of the highlights of the day was morning chapel with the children seated step above step on the spiral stairway, singing with gusto, “Onward Christian Soldiers”, Mr. J.E. Brandon was principal at this time.

A shiny new thirteen-classroom brick building, untainted by school odors, greeted the thirteen faculty members as they met for a pre-school conference in the fall of 1935.  It was commodious and luxurious with a new auditorium, a cafeteria, a library with six hundred thirteen books, a home economics department, and a manual arts department.  The school was on a six-three basis for one year.  Mr. George Cranor, Chairman of the County Court Building Committee deserved much credit for the extra features of the $25,000 school which was rated in 1963 as one of the finest school buildings in Rutherford County.

“Hail to Thee, McFadden”, the Alma Mater song, written by Mrs.  Lowe and Mrs. W.B. Carnahan, was sung by the eighth-grade graduates at the commencement.  Those words “We shall ever remember McFadden days” sung from memory that May day, have remained in the hearts of many of the students.

Many individuals became interested in the school.  Dr. J.C. Waller and Dr. Charles Lewis are just two of the many who gave their time to improve the school.  Murfreesboro Civic clubs, the Community Chest, the Charity Circle, the Garden Clubs, and Murfreesboro business firms have made liberal donations.  Throughout the years, active Parent-Teacher Associations have contributed their time, energy, and financial support.

Homer Pittard became principal in 1937.  He also served as eighth-grade teacher and coach.  He headed the school for nine and one-half years.

In the bleak, death time of winter, on Sunday, January 26, 1939, pupils, teachers, and parents again mourned as they viewed the remains of their flame-charred school.  The fire was discovered by Red Travis, a newsboy as he was delivering papers.  The Fire Department fought the fire until noon.  The origin of the other two fires could be explained, but the Fire Marshal was outspoken in his belief that the fire had been started by some person or persons.  There were rumors and rumblings, but a mysterious veil covered the origin of this disaster.

Four hundred five boys and girls became school orphaned with no adequate building available for use.  An unwanted winter vacation began for all the fifteen eighth grade pupils who were required by state laws to complete eight months of school before they could receive their diplomas.  The antebellum courthouse now played a new role.  It acted as a school room.  The county’s circulating library on the second floor became a classroom with Mr. Pittard as teacher.  Later, after Crichlow completed its term, the other seven grades used that building for six weeks.

Heads seared, but unbowed, the people of the community and the Rutherford County Board of Education started plans for building another school.  The County Court failed to ratify the appropriation to make possible a fire-proof structure, but the construction of another building started in May.  The bid was let for $35,000.  {From another article- But after McFadden burned, and the Depression years were lean, a decision was made to tear down the Mooney School building and use bricks to build a brand-new McFadden, which still stands today on Bridge Avenue.}

Fortunately, the fire demon has not visited the school since except for a small blaze with damage confined to four classrooms.  This was in 1953 while Frank Fuson was principal.

Two trophy-filled cases are tangible evidence of McFadden’s prowess in sports.  The year 1945 was hallelujah year because both boys and girls won the county basketball championship title.  The school has been county champions nine times and runners-up six times.  The teams have received invitations to the Mid-State Tournament at Shelbyville every year.  The girls were runners-up in 1956.  The football team was city champions in 1960.  The fifth and sixth grades won the Rotary Track Meet twice.  Bobby Jones was runner-up in the national marble contest one year.

During the eight years that Mr. Wiser was principal, a new wing consisting of eleven classrooms and a modern cafeteria was added.  Much new teaching equipment and supplies were acquired.  In the overall teaching, all the principals insisted that the school make every possible effort to meet the needs of the children.

Our watchword, so fittingly phrased in the Alma Mater chorus, remains “Forward be our motto whate’er the years may bring”.

In 1965, the school board approved and built a new gymnasium.  The existing gymnasium was converted into the school’s library.  In 1978, a new wing was constructed due to the increasing enrollment of students.  The new wing included two large classrooms, eight regular classrooms, a bathroom, and a science lab. 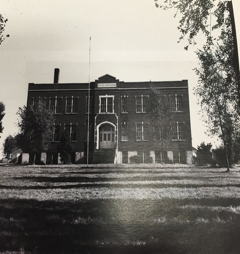 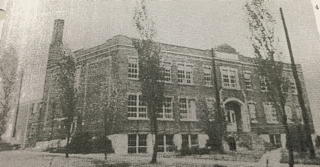